“The Dragon God” by Brae Wyckoff

Book # 2 in the Horn King Series

“With magic rocks and dwarf slaves, this is a cross between Temple of Doom and Lord of the Rings.” – Raven Reviewer

As the heroes of Ruauck-El emerged triumphantly in The Orb of Truth, the first book in the Horn King series, they could not have imagined that an even greater evil still lay ahead of them.

Raina has discovered a new threat to the realm, and teleported King El’Korr – against his wishes – to the West Horn King’s capital city, Tuskabar, in hopes of thwarting an evil Mystic’s plan to acquire the five dragon stones. Each relic harbors an ancient dragon spirit, and, if combined, would unleash a multi-headed deity beyond imagination, to begin a reign of terror upon Ruauck-El.

Meanwhile, Bridazak and friends are in search of Spilfer Teehle’s missing family. Their quest leads them to visit old enemies, travel through beautiful but deadly locations, and will ultimately take them on an adventure of new discoveries of themselves.

Each group is on their own mission, but as destiny would have it, their fates are more entwined than they could possibly know.

Can we please get some more likes for Patrick O’Scheen on his author’s page?

So, tag a friend and lets help Patrick reach this new goal

“This is the continuing story of James C. Patch and Jacob
Masterson. The fi rst book, The Books of James C. Patch:
The Barrier chronicled the adventures of Jacob Masterson as he
attempted to destroy the evil barrier that was preventing spirits
from entering the Utopia on the other side. James C. Patch was
an author living in the early 1900’s when tragedy struck his
family when he decided to write down what he found out about
death and the afterlife. James C. Patch was a split-spirit. A spirit
that could split from his body prior to death and was able to
cross through the barrier and see through his spirit what was on
the other side. While in his spirited state he noticed millions of
spirits that were not able to penetrate the barrier. The majority
of these spirits were children who had not had time to collect a
lot of memories and those are the spirits that the barrier preyed
upon. Jacob found out that memories were the key to the rapid
penetration of the barrier and they were able to connect with
loved ones that were already on the other side.”

This is book # 2 in The Order of The Dimensions Trilogy

Anton Zelov has come back and is set to avenge those who stood in his way. A race against time ensues to keep Jane’s family away from their clutches. But is victory in store for those who must take down the Order or has their battle just begun?

Children’s First Golf Steps is an introduction to the game of Golf with the animals of Africa.

Enjoy and have fun playing golf with us.

John G. Othitis started playing golf from the early age of eight years old, spending many hours on the golf course. He played in many junior golfing competitions representing his local town, and won many major Junior and Senior competitions for the Gweru Golf Club, Zimbabwe, Africa.

Keep up with all the craziness!

Click on the link below and submit your email address!

If you’re ready to get fit and improve your health, then this book is for you! You can get fitter and stronger than ever just by exercising at home. No more expensive gym fees, no more taking the time to drive to the gym, you’ll be on your way to better strength and fitness in the comfort of your own home! Don’t like the music the gym has playing? This book lets you choose when and where you exercise, and YOU pick the tunes!

This book covers specific exercises and provides detailed instructions on how to do them correctly and safely. In addition, you’ll find simple workouts that can help you lose weight and gain strength, all on your own. Included are links to videos so that you can see exactly how to perform the movements properly.

Download your copy today and start improving your health and fitness!

Armed with this book, you’ll love how easy it can be to exercise at home. Gyms can be uncomfortable, whether because they’re full of people, or because you just don’t know where to start. Wandering around the gym trying to figure out what to do can be really stressful! I’ve tried to take the guesswork out of working out so that you know what to do and how to do it. You can do it…you’ve got this!

Don’t wait, download this book and discover how simple training at home can be!

“What a wonderful debut novel!”
“If you love a fast-paced mystery, this book is for you.”
“I loved it!”
“My new favorite author.”
“I can envision a long, successful career in [Jane’s] future.”

She’s got a passion for antiques and a penchant for mystery…and Olivia McKenna is about to find herself in the middle of a murder investigation led by a devilishly handsome state trooper who could be the love of her life!

Check out this fun, exciting debut novel from an Amazon Top 100 author in cozy mysteries. It will make you smile and keep you guessing from start to finish!

Olivia McKenna has her own antique shop in the beautiful White Mountains of New Hampshire, where she makes just enough to keep her Golden Retriever, Molly, stocked in treats.

But her peaceful existence is about to get turned upside down. One day, while she’s out antiquing, she discovers a body in a quaint little antique store. And that leads to a fateful meeting with Josh Abrams, the stunning state trooper with the sexy blue-green eyes who’s leading the investigation.

Can Olivia help Josh solve the mystery? Will their instant attraction turn into true love? Download “Antiques and Avarice” today or order the paperback from Amazon and find out!

“The Asset” (A Wounded Warrior Novel) by Anna del Mar

Anna del Mar’s explosive, sexy debut novel in the Wounded Warrior series, perfect for fans of Lisa Marie Rice and Lora Leigh—the story of a woman desperate to escape her dangerous past and the navy SEAL who would lay down his life to save her

Ash Hunter knows what it is to run. A SEAL gravely injured in Afghanistan, he’s gone AWOL from the military hospital. Physically and mentally scarred, he returns home to his grandmother’s isolated cottage—and finds a beautiful, haunted stranger inside.

Lia Stewart’s in hiding from the cartel she barely escaped alive, holed up in this small Rocky Mountain town. Surviving, but only just. Helping the wounded warrior on her doorstep is the right thing to do…it’s loving him that might get them both killed.

Soon, Ash realizes he’s not the only one tormented by the past. Pushing the limits of his broken body, testing the boundaries of her shattered soul, he’ll protect Lia until his last breath.

This book is approximately 97,000 words 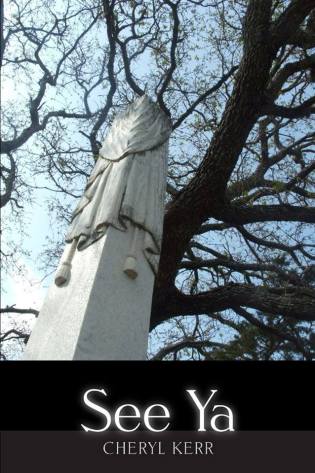 “See Ya” by Cheryl Kerr

Lives are often stories not yet written down. Not always ended, either, which can fuse the living and telling into a path not always clear. Some tales take a long time to tell, especially when they start in 1944 and flow into 1996, and the characters weave in and out across those years without knowing one another.

Retired Colonel Matthew Rankin s sudden death at a party in 1996 leaves a gap in many lives. Deepest, perhaps, in that of his daughter, Manda, whose grief is overwhelming as she realizes how little she knows of who her father was. His strict and formal way kept Matthew at odds with his daughter. The coincidental arrival of Pieter Becker, a man following a just-found trace of his own father s World War II disappearance, sets the two of them in motion to solve the puzzle of their fathers connection. At first, the only clue they have is a photo taken of the two men together in Grand Central Station in 1975 by Willi Prang, a garrulous former WWII POW who says he knew Pieter s father. In 1975, Matthew Rankin was an on-the-rise Colonel in the United States Air Force, successful and devoted to doing the Pentagon s bidding. The other man in the photograph is Pieter s father, Franz Becker, according to Willi Prang, whom Pieter meets at a reunion of ex-German POW s. But Pieter s father died in World War II. Or did he?

Book Reviews by the Reluctant Retiree

Looking for My Next Great Read!

The Art Or Endeavour Of Being Lucid In A World We Live In... Secrets Of The Psychics... Energy, Universe, Futurism, Film, Empowerment...Digital Abstract Art Rendering...

Global Books
The Art of Blogging

Monthly Festival : Turn your book into a movie and get it seen by 1000s of people. Or garner FULL FEEDBACK from publishers on your novel and help your next draft. Or get a transcript video of your novel performed by professional actors.

For me writing is the strongest method of communication. I write what I feel, and not afraid of giving my opinions. I am not biased and cannot be influenced by any superior authorities.

Gastradamus is my name, and Gassy Topics are my game!